The Sacred Heart (also known as Most Sacred Heart of Jesus) is one of the most famous religious devotions to Jesus‚ His physical heart as the representation of his divine love for humanity.

We offer this shirt in four different styles, 2 black and 2 white. The black shirt is offered with gray ink for a subtle look or with red ink for a bold look. The white shirt is offered the same way using both gray and red ink colors. The graphic is off center and lowered to give the shirt a unique style.

The graphic also depicts a stylized version of the Sacred Heart, custom designed by Nick France, founder of MyCatholicTshirt. “I wanted to take this centuries-old devotion and give it a contemporary look and feel without omitting any of the details so it retains the tradition of the devotion wile giving it a fresh style.” said Nick.  Offered in 100% cotton, made to be worn untucked, . This shirt is 100% Catholic Christian, straight from the rich tradition of the Church and also very much today in style and comfort.

Description of the Sacred Heart

The Sacred Heart is often depicted in Christian art as a flaming heart shining with divine light, pierced by the lance-wound, encircled by the crown of thorns, surmounted by a cross, and bleeding. Sometimes the image is shown shining within the bosom of Christ with his wounded hands pointing at the heart. The wounds and crown of thorns allude to the manner of Jesus’ death, while the fire represents the transformative power of divine love.

Some history of the Sacred Heart

The devotion of the Sacred Heart began in 1672 and is predominantly used in the Catholic Church.  Additionally, it’s used among some high-church Anglicans and Lutherans. The devotion especially emphasizes the unmitigated love, compassion, and long-suffering of the heart of Christ towards humanity. French Roman Catholic nun, Marguerite Marie Alacoque, gave us the devotion in its modern form. She learned the devotion from Jesus during a mystical experience. Various facets of Catholic mysticism in the Middle Ages were predecessors to the modern devotion.

Prayer to the Sacred Heart 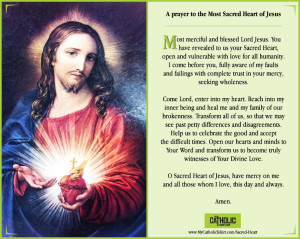